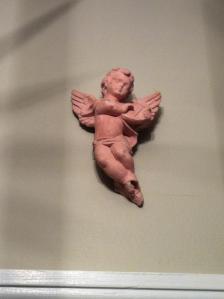 Many years ago, nearly twenty five by my reckoning although it may be more or less, in a place far far away I knew a man… a man-child… who had a heart big enough to span mountains, to wash away your tears and replace them with laughter, a man who wrote the most amazing poetry… things of such stunning beauty and strength and yet so fragile they took your breath away.

It was a time when we were trying on skins of the adults we would become, or hoped to become, or perhaps never wished we’d be.  It was a time of sodden streets and lamp posts, of frightful highs and lows so bottomless light would never penetrate.  It was a time for dancing and laughing and red beans and rice and endless bottles of cheap Rolling Rock clutched against skin wet with Northampton’s summer and the promise it held.

I was drowning in it… reveling in it, cock walking through it and being sick in it all at once.  This man, my friend, that gentle soul, saw through my fears, the heart scars that etched themselves across my flesh in interesting patterns and he reached out his hand and beckoned to me and said ‘I know.’

I was not there, not quite… in that place.  I almost fit in… almost.  But whether it was for comic relief or something else entirely he narrowed a yawed chasm so that I would not fall in.  He snuck me into places I shouldn’t have been and talked to me for hours in the deep dark that comes so late at night in Western Massachusetts when it’s too cloying and dangerous to sleep.

We talked about Spanish moss and kudzu and the rich stink of his hometown washed clean with gin and tonics.  We talked about everything and we talked about nothing and none of it mattered, not really… except that it did matter.  It mattered a great deal to me as I ran back and forth from a leaden pendulum that caught at my clothes and never let me forget time was fleeting.

When I think of him, when I reach back across the years to see, he is only ever in shadow and profile, kicked back on a porch with a beer in his hand the light from inside playing off his face as he spoke, as cigarette smoke made tendrils around his face as his voice silenced the crickets and made the moon pay attention.

After one of his sojourns home he brought me a present.  Wrapped up in the cheap paper that spoke of its origin, he tossed the parcel in my hand and I unwrapped it, this gift, this thing from so far South I could barely imagine it.

It was an angel.  Well truthfully it is a cherub, all fat and clutching a harp… but in my eyes it was an angel.  It was redemption and safety.  A beacon.  This clay, not even bisque, transformed in my palm.

I took that angel home with me, rough and pink and fragile and I tapped a nail in the wall of my cheap apartment and I hung it up.

Time passed and the moments of summer gave way to the rigors of the real world and I slipped back into my skin, a skin, shook the moss from my breasts and dried my body and my tears and lived.

We drifted, he and I, in and out of conjoined circles and finally apart as the weeks gave way to months and even a year until finally we remained standing on opposite sides of that chasm he closed for me.  I like to imagine that if it had happened that way we would have waved at each other and traded a knowing smile.

And when I moved that sweet little thing came with me… over and over and over.   Clay became idol became talisman became ritual.

Every time I’d pull up stakes from apartment to town to city across the country and then back again over the years that little angel was my first and final ritual.  The last thing taken off the wall over the front door of my home, she’d be tucked in my bag for whatever roads led forward and she be the first thing up.  Before tea, before a cigarette, before anything that angel goes up above my front door.   She is a welcome and a protector.  A reminder that we are safe, that we are loved and that we can do anything.

My friend… the gentle soul who placed this little bit of magic in my hands so many years ago… he is gone.  The news of his death in January has touched me in ways I hadn’t expected.   I know this is only one small piece of the great man he was.  But it is my piece and his piece together.

I will never forget.

Delaware based author and self confessed book nut Amy Hanson has been publishing professionally since 1995. She covers myriad subjects ranging from multi-genre music journalism and literary biography to pop culture, health issues for the layman as well as an assortment of metaphysical oddities.  An avid foodie and film buff, she currently resides in the idyllic college town of Newark with her husband and three cats. END_OF_DOCUMENT_TOKEN_TO_BE_REPLACED
This entry was posted on Friday, February 3rd, 2012 at 9:20 am and posted in Long Ago. You can follow any responses to this entry through the RSS 2.0 feed.
« Stagnation

3 responses to “For Kevin”